Perry County was formed on November 1, 1814 two years before the State of Indiana was admitted to the Union. There were obviously Native Americans living in the area much earlier than that, but the earliest documented mention of the area of Perry County was in 1805 by a group of surveyors.

A smaller part of a much larger area, the site of Perry County was claimed by both France and England in the 1600s. The controversy ended in 1763 with the end of the French and Indian War and the defeat of the French.  From the English-American point of view, the colony/state of Virginia maintained a continuous claim to the area.

While officials were drawing out barriers and county lines, Perry County was part of Knox County, as was most of the state of Indiana with Vincennes as the capital. In 1809, Ohio Township was formed which included Perry, Spencer and Warrick Counties and parts of Crawford, Dubois, and Pike Counties.

Further map divisions gave us much of what is now Spencer County. Thomas Lincoln (Abraham Lincoln’s father) visited the area in early 1816 and picked a site in Hurricane Township. By the time he came back in December 1816, the site was then Carter Township. Spencer County’s formation in 1817 removed these areas from Perry County. It wasn’t until March 1818 that we finally have what we know as Perry County today.

Perry County was named after the War of 1812 hero Commodore Oliver Hazard Perry. The naval officer was in command during the victory on Lake Erie, one of the great American naval triumphs of the War of 1812. Perry is from Rhode Island and never stepped foot on Perry County, Indiana soil. The county was named in his honor as an American war hero, as was common at the time. 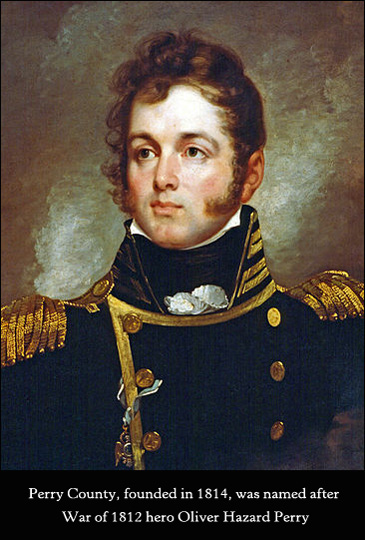